The beauty of alts, for me, is always having something fun to play regardless of whether I’m in the mood to bash, fillet, or broil. The downside of alts, especially in a gear-centric game like Warcraft, is equipping the little buggers.

I expressly didn’t take leatherworking as a profession this time around (not yet, anyway), or blacksmithing, because I remember what a huge resource sink they were; and, indeed, it’s turned out to be far more profitable to sell hides and metals than to use them, even with keeping some back to send to guildies or use in jewelcrafting. My loot luck is probably as poor as the next person’s — what drops is usually stuff I can’t use, and often stuff even the alts can’t use; I seem to get mostly cloth drops, of course, since I *do* have a tailor (even if she’s not much good yet). 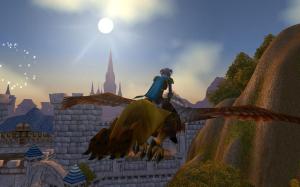 So far the girl-gaggle is using a combination of quest rewards, the occasional decent drop from Icewolfe (who is 10 or so levels higher than the others) and AH-bought items; for all that prices have gone up since I last played, as one might expect, there are still bargains to be found within the current economic framework. Just as well, since at any one time I probably have 3-6 characters to equip, and that’s without upgrading stuff every couple of levels as one might do for a more focused char. (It’s even less worth it right now since none of them are over 40 and most aren’t over 25.) As far as I can tell, my chars are doing just fine with their gear, since what they’re expected to do in it — or with it — isn’t all that demanding: questing, harvesting, exploring.

But — and this is something that bedevilled me last time I played — is their gear good enough? Should I be looking for blues or better? I don’t think so, because I don’t intend to tackle the “difficult” content much if at all, but with the gear obsession that is WoW and that forms such a large part of all the conversations you hear around you, it’s almost impossible not to start wondering. At least I’m not item-motivated: I don’t care about what the Joneses are wearing, but I *am* wondering if better stuff would make me noticeably more effective even at the lower-key stuff I enjoy. Has WoW changed enough that my progression will be slowed or stopped without it? What happens if I ever make it to the Outlands? To Northrend?

I’m assuming the answer to that is “No” but we all know what assumptions do (make an ass out of you and umption, to quote Harry Dresden). I’ve had no problems tackling what I need to tackle for quests, and if it takes me a few seconds longer to do this fight or that, I’m not worried. I’m playing for enjoyment, and I’m enjoying myself, so that’s that.

Still… one does wonder. I do see the blue stuff at the AH, and to my eyes it’s only marginally better than some of the green stuff while being 10 or 100 times the price — for something I’ll outgrow in 4 levels? I’ve got money but I’m not rich, and I suspect by WoW-2009 standards I’m barely out of pauperhood. If it were more reasonably priced, of course I’d pick it up, because a better bow or a better shield certainly does provide an advantage; but that advantage isn’t worth the price tag most people seem to associate with it.

I think that’s because for me, blues and better have no intrinsic value just because of the colour of their label. If it’s blue and it’s not really any better than my green, then no, I won’t choose the blue every time. Just as well really, or my blue-decked alts would be sleeping under Stormwind’s bridges.

3 responses to “Not cheaper by the dozen”