As I mentioned last week, I made  a Sims 3 hippie. After playing Herb, whose ambition and perfectionism are fulfilling but also very time-consuming (job, garden, a little fishing on the side; friends? who needs em!), I wanted to see if I could make a character who would never work.

Enter Sunbeam Moonlight, who was developing a backstory before I was even done with the outfit-creation screen. Her grandmother left her a cute but dilapidated old house in Sunset Valley… and not much else. I picked that pretty beach-front lot we also picked for Herb, which isn’t cheap, put a smallish, older-looking house on there, and spent a fair bit of the remaining money on trees and other lot decoration. By the time I was done, Sunbeam was left with about $1000 to represent Grandma’s small cash bequest — probably stuffed under the mattress.

I left the house empty not because I actually wanted it empty, but in an attempt to symbolise Grandma Moon’s tatty, mostly useless old furniture. Problem is, if it’s there your Sims can use it or benefit from it, and I wanted a large part of the house to be useless for a while, so… empty. The only things in there were a bed and a  tatty old sofa — no bathtub, no toilet, no kitchen, in an attempt to represent that stuff was there, just not in any state to be used; if Sunbeam wanted the modern comforts of home, she’d have to renovate the house one bit at a time.

Fortunately, Sunbeam couldn’t have cared less. She’s a lucky, outdoorsy, artistic flower child who loves fishing (of course she releases them!) and doesn’t love committment — the latter included not only because I couldn’t see Sunbeam ever wanting to settle down with anyone, but also because it supposedly makes it hard to hold a steady job, and ideally I didn’t want her holding any job at all. 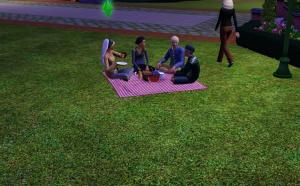 It’s unfortunate in a way, but it seems almost too easy to keep one’s sims happy in Sims 3. Step 1, be careful what negative traits you pick; step 2, watch that mood bar. Hell, even at work you can “take it easy” which apparently counts as having fun, which to me seems almost too much and I’m someone who doesn’t like too much of a challenge when it comes to keeping my Sims happy.

So, even without a useable kitchen or bathroom, Sunbeam had very few problems. Being outdoors most of the time makes her happy anyway (mood bonnus), and I figured her for a gregarious sort; so I took her to the park a lot where she not only met fellow Sunset Valley residents and even a few other ardent anglers, but also found that getting fed isn’t all that tricky and doesn’t cost a dime if you’re not too picky what and whose food you eat.

As Jen mentioned in her new Sims experiment, there are things just lying around in the Sims that you can use for income if you don’t work or are otherwise strapped for cash. Harvesting the apple and lime trees at the park provided a little income and had the added benefit of ensuring Sunbeam always had a fruit in her pocket to snack on — again, not particularly satisfying fare when the best foods can lift your mood for hours, but enough to keep the wolf from the door in the middle of the night. Then there are seeds… which I should never have touched with Sunbeam, especially knowing how gigantic and time-consuming Herb’s garden became (currently at 36 plants, but at one point he was up to 47); my only explanation there is that Grandma Moon almost certainly had a little vegetable garden and that Sunbeam is channelling her Gran without knowing it. Anyway, she took a few seeds home to plant and before she knew it, one of them had turned into… a money tree! 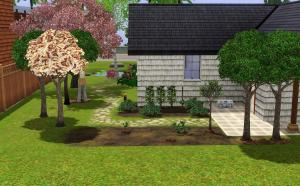 Yes, those are Sim-$ bill leaves

It’s tough to stay broke when even the vegetation is throwing money at you. Looking back, I might have given Sunbeam the “good” trait, which would have allowed her to donate a large portion of her money to charity anytime she pleased, thus staying away from the lure of empty materialsm. That said, the “renovations” are costing a fair bit and so far Sunbeam has managed to refurbish part of the bathroom (toilet and bathtub — the cheap kind) and most of the kitchen. The work was funded by winning a hot-dog eating contest (I have a feeling being “lucky” has a huge effect on these events) and by a couple of opportunities that came her way that didn’t seem too much like caving in to the Man. I can’t recall exactly what they were — one was to grow lettuce, and I think another was to catch a particular kind of fish.

Even without working, Sunbeam’s days are pretty full. Having tatty cheap furniture or using public facilities tends to mean that one’s mood isn’t as good, activities such as getting clean or getting a good night’s rest take longer, and so on. Besides which, there’s always plenty of fish to be caught and fellow residents to be chatted with. Sunny already has an address book that includes over 30 people, almost a dozen of which are friends — usually, making and maintaining friends takes time, but when you’re not working it’s amazing how much more casual socialisation you can get done on your way to harvesting or fishing at the park, or getting clean at the gym. 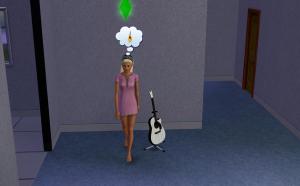 One of the other things Sunbeam was finally able to afford was that guitar she was dreaming of (in game terms, I got a short-term wish to learn the Guitar skill, and it occurred to me that no flower-child should be without some kind of musical instrument). She immediately took it with her into town to practice — none of this retiring, practice-on-your-own stuff for her. If your heart is good, your music will be too! (Eventually.) 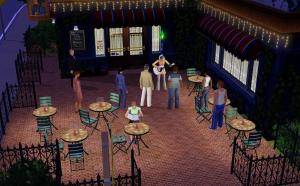 Paying the bills has been difficult at times, especially since the little bastards sometimes seem to come twice a week, but maybe it just seems that way because she’s broke. As an unemployed slacker, Sunbeam is a nice contrast to Herb, though I have to watch myself and make sure I don’t get tempted to do stuff that’ll make money, like get a part-time job. Making money off her gardening side-line, off particularly prize fish, or off collections (she found some nice rocks, which she sold, and some lovely butterflies, which she released after keeping them in the house with her for a while) seems okay to me, but working would be a capitulation.

The thing is, as Flash of Steel so cogently pointed out, Sims 3 is pretty much set up for people to be good little rat-race rodents, wanting better jobs and bigger and better items bought with their wage-slave salaries. Sure, you can be an artist or a writer or a homeless bum, but most of the short-term wishes push you towards consumerism and upward mobility — which one is of course free to ignore, and one could argue that most games have to have some sort of progression goals or the achiever-players won’t feel like they’re doing anything useful. Even the less achievement-oriented among us like to have milestones, I suspect. For now I’m just choosing to see those “wishes” as the image of normalcy Sunset Valley (and Sims 3) society is trying to impose on Sunbeam, who simply refuses to play along. I ignore all the “get a career in X profession” prods and all the “buy furniture worth more than $Y” hints; I also ignore all the talk-to, make-friends, social-type wishes because Sunbeam will socialise in her own time and on her own terms — and is, as I mentioned earler, very gregarious; she just won’t let society tell her whom to see and when she should want to see them.

Sure, it’s futile in terms of actual protest and it’s nowhere near as profound as Alice & Kev — but it’s fun to play someone who can do exactly as she chooses from waking up in the morning to going to bed at night… provided she leaves enough time for a bath and a bladder-stop here and there.

5 responses to “Sims 3: Fighting The Man”