So what’s with the deafening silence these last few weeks, I hear you all ask? Well for one thing, I’ve had real life stuff going on; other than that, most of my playtime has been taken up with Fallen Earth.

Yeah, I’m a fickle MMO-abandoning byotch. I wouldn’t have thought so 6 weeks ago, but there you have it. I dumped EQ2 without a second thought — well, actually, it’s more like we agreed to see other people. I met this hot, modern, just flaky enough to be interesting other MMO so me and EQ2, we’re on a break. It’s mutually agreed. Honest.

Which isn’t to say EQ2 suddenly sucks — it’s still a lovely game and I’d still be having a lot of fun playing it (if I were playing it). But Fallen Earth is filling a gap in my gaming needs that I didn’t even realise was there. For one thing, obviously, it’s not fantasy, and in many ways that’s really refreshing after a steady diet of YAFMMO* in the last half-decade or so. SWG is the only other game I can think of offhand that wasn’t fantasy, not counting various short stints in various betas (like Pirates of the Burning Sea). Oh wait, City of Heroes isn’t really fantasy either — except that it sort of is, with all the caped/flying/vampire/mage/greenarrow crusaders out there; and City of Heroes had one thing that really ended up getting to me, which was the awful sameitude of the various mission styles.

Moving on. FE isn’t the only non-fantasy game out there, but it’s a pretty good one. It’s occasionally very funny, and best of all it’s not in-your-face see-what-I-did-there funny. I almost missed a conversation between two NPCs in Midway about whether bullets are better than ninjas — you had to be there but trust me, I LOLed. It’s also gritty, and sometimes even grim — and sometimes it’s grim and funny at the same time. Some screenies will illustrate:

Zombie apocalypse is no joke!

It’s definitely a game for grown-ups — hence its M rating — and while it’s not full of sugars and fudges, it does have grown up dialogue and at my age that’s oddly refreshing. When a quest NPC is being a dick, the other NPCs call him on it:

On the downside, the blood splatters are really quite silly in first person, but I’m hardly ever in first person unless forced to by cramped quarters so I don’t really care. In third person it’s either not there or not noticeable — I couldn’t tell you since I don’t notice it. I’m usually too busy noticing stuff trying to bite my face off. (Sandworms are now on my forever-Shit-list, as are all kinds of creepers.)

The gameplay has been both better and worse than I expected or remembered from beta. The reticle thing hasn’t been an issue at all after the first few days, which is ironic because it’s one of the main reasons I didn’t try FE at release. As it turns out, if that’s the only way you can fight and you actually want to fight stuff, you’ll get used to using it. I’ll probably be all confused not to have one when I log in to EQ2 or some other non-reticle game now.

The UI, however, is primitive enough to make an etch-a-sketch drawing of a UI look almost sophisticated in comparison. Let me count the ways.

Let’s start with the hotkey bank that can’t be split up in any way and can only ever be a monolithic block. Sure, you can expand it to 18 slots across — errrr, 18? Who uses 18?! 12, yep, we all know that from every MMO on the planet. 24, sure, I’ll take it instead of two distinct hotbars (or hotbar banks) — but 18? That means my second line of icons would start at shift-6 — oh yeaaaah, I’m totally going to remember that when some creeper or sandworm or zombie is chewing on the back of my head.

Second, the chat interface. You can’t change the colour of text channels (and yes, SOE games — EQ2 and SWG included — have rather spoiled me for that kind of functionality), which is a pain in the ass when Help channel text is the same colour as Clan channel text. In any case what the colours are doesn’t matter, it’s the lack of user customisation that bugs me. This is 2010, not 2000, and I expect EQ2 kind of functionality from my UI rather than what we used to get in Asheron’s Call. I don’t think it’s rocket science — though I’m sure that kind of thing takes resources. (Yes, I complain and critique. No, I never make the mistake of thinking things are “easy” to fix or implement. But just because they’re not easy doesn’t mean I shouldn’t notice their absence or ask for their inclusion.)

Oh and back with the hotkeys — the icons are pretty rudimentary and not very well differentiated. It doesn’t help that you’ll have 483,2956 skills by level 5, and I hear the end game (not that I’m ever likely to see it) is a mash-fest. In that respect it’s very similar to many other MMOs, EQ2 included, and it does bug me generally that we somehow end up doing more keyboard-staring and -mashing than we do looking at what’s happening on the screen itself.

I have to admit to being quite unreasonably irked by the fact that cooldowns appear to be up before the ability is actually ready for use, so I’m constantly getting “This ability is in cooldown!” or “This ability isn’t ready for use!” If it’s not bloody ready for use, don’t show it as ready, and if that means you have to add some kind of tiny delay so it’s actually ready a split-second before it appears to be, that’s fine by me. I’d rather lose a tenth of a second than waste 2 seconds trying to use an action that isn’t as ready as the UI tells me it is.

And inventory… yeah… um. I don’t have much good to say about it except for the fact that the single monolithic “pack” can be filtered into several user-customisable tabs. That’s pretty cool, though I’d have preferred separate bags. And the downside of the tabbing system is that the inventory “boxes” you see onscreen will shrink and expand as your inventory gains and loses items. It’s not elegant. It’s messy and a pain in the ass and apparently it makes it very hard to hotbar stuff from inventory and have it reliably stay on the item you want hotkeyed.

End of UI rant. If you know me, you know I’m a UI … very-intolerant-person, and pretty blunt (though hopefully fair) in my criticisms. Obviously it’s not a game-breakingly bad UI or I wouldn’t be playing, but that’s mostly because it’s so rudimentary and does so little. Oh well. Moving on.

The Ability Points, Levels and Skills system confused me somewhat at first but it doesn’t take long to get the hang of. Once you do understand it, the problem isn’t so much getting the AP and levels as figuring out where to spend said AP. You can literally build any kind of character you want — but one thing you won’t be able to do is build a character that’s good at everything. Great at one thing, no problem. Good at several, easily done. Good at everything — not going to happen. Just as well really or we’d have a little army of post-apocalyptic Supermen running around and how boring would that be?

It is of course scary and engrossing in equal measure trying to figure out what you’re going to do with a given character, especially when you have no respec option. I’ve done a little research, though not much, and I’ve found this handy-dandy build calculator thingy. In any case I’m not even out of sector 1 yet so fortunately I don’t have to decide just yet what I want to be when I grow up. It’s very interesting to note that although I have 3 characters that are essentially the same base “class” — crafter — they all play very differently from each other. Maybe it’s all in my head, but whatever it is, it’s working and I’m having a blast.

Right now my characters range from 12 to 17, and three of the four can craft. What can I say? Initially I thought I’d have to specialise my crafters (and yeah, I’m an altoholic), though as it turns out since every crafting and gathering skill is based off the same INT/PER attribute combo, a single character can in theory master all the crafts. It takes a while, but time is the only restriction.

I could have rerolled but what the hell, I like crafting — and the nice thing is you can make a character who can craft but also fight stuff, so it’ll probably all come out in the wash in the end. And you know what? For all the little flaws I mentioned above, FE is an extremely compelling and entertaining game, provided you like its quirks and don’t hate the genre. If you’re looking for fantasy, move along. If you’re looking for something a little different (and yes, complete with Monty Python references here and there), then Fallen Earth might be just the ticket. It’s all one server, so do say hello if you decide to play!

Wordage is creeping up, so I’ll wrap this up with a few screenies. If anyone reading this wants any particular info on FE and how it plays, just ask. 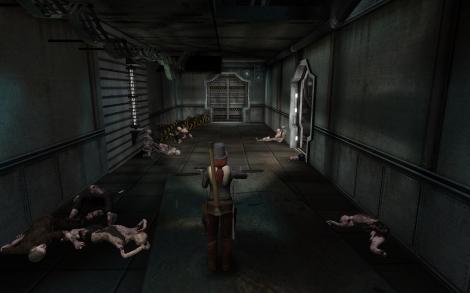 It's a LONG way to Sector 2 (and back again)

* Yet Another Fantasy MMO

10 responses to “Fallin’ for Fallen (Earth)”