In which I discover the power of absence

I missed a battle yesterday because I was too busy writing my conclusions post, and hey presto! When I get back we’re in control again. Yay! Huzzah! Drink vodka and let slip the feral druids of war! (No, I don’t know why I’m polluting Shakespeare with grain alcohol and hybrid classes.)

The next battle went fine, even though I was there — hey it’s defense, it can be done by an army of sleepy chimps — but the battle after that was an almost-debacle where the only reason we didn’t lose the island was because ONE of the chimps was vaguely awake.

It was odd. I fought like a demon in that one and so it seems did everyone around me, and yet still we slid almost inexorably towards defeat. It’s actually not about the chimps – the only reason we didn’t lose the island is because it’s too easy to defend. Slowly, sloooooooooowly I’m seeing people come to and stay at the flag, after many many many repetitions in chat. Don’t fight way the fuck over there where my arrows can’t reach your opponent – if you can’t see the possession bar, you’re in the wrong damn place. (As an aside, I can’t see the possession bar at all. I suspect one of my myriad add-ons is to blame.)

Kind commenters have pointed out that an upcoming patch may change the details of how Tol Barad works. Then again, WoW patches less often than Halley’s comet comes around, so I’m not holding my breath.

PvP ProTip of the Week

ProTip, though I doubt anyone who visits here is that kind of asshat: Yelling at people in chat and calling everyone else an idiot because they’re not doing what you’re telling them — not matter how smart your instructions might be? That won’t ensure compliance. For my own part it ensures a hearty “Screw you too, buddy!” if only in my head. Being called an idiot makes me contrary – I know, I’m a little unreasonable. I can’t imagine most of the other people in the raid are going “Oh my god, he’s right, I am such a moron, let me quickly run and do exactly what he says.”

This irks me. Do. Not. Call. Complete. Strangers. Names, you jackwagon dickwad! It’s not polite. Plus it’s counter-productive.

Brilliant, or so dumb it only seems brilliant?

Speaking of instructions, someone was very earnestly telling us never, ever, ever to return to where we died in TB — so if you’re defending the Slagworks and you die there, go anywhere but there when you rez. I’m still trying to puzzle that one out — it’s either brilliant strategy, or it’s really stupid pseudo–brilliant strategy founded on the pseudo-strategic “let’s go round in circles!” principle, which isn’t really a strategy at all but rather simply a direction.

I can see why you might want to simply move on because mostly when the bad guys come in, they do it as a zerg and you’ll be dying anyway, so you might as well reinforce somewhere else and not waste 2 minutes on a hopeless defense. On the other hand, if the other side knows all they have to do is kill you once and you’ll go away, it pretty much ensures zerg tactics and it leaves you open to smarter moves.

This is an Eddie Izzard continuum-of-cool conundrum.

Last and least, some random screenshots

Groove is in the heart (Alouette + ogre + dwarf conga) 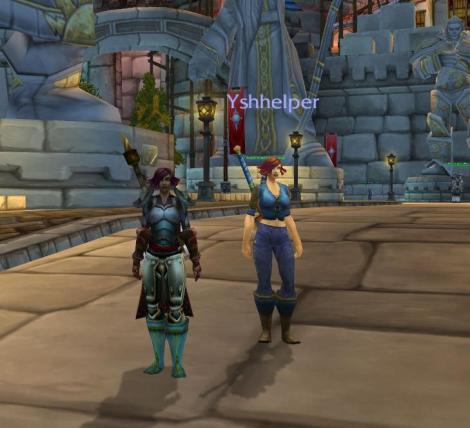 My very own minion straight off the cloning line! (Unintentional, too.)

I knew that priest was dodgy the second I saw his I ❤ Nyarlathotep badge!

2 responses to “Tol Barad: All I need to do”