So. I braved snow, snow, snow and more snow to get into town on the 21st (couldn’t get out for snow on the 20th) and pick up a copy of SW:TOR. I suspect if a gajillion feet of snow hadn’t fallen since Thanksgiving, I probably would have got myself a preorder copy after all – though there was no way I was getting a digital version. Trying to download 25 gig or however  big the client is on our crappy little DSL connection? I’d die of old age before it was done.

Anyway, copy was bought and brought home, though not installed until the 23rd. Work, snow, work work, snow. You might be able to tell from my prose that I wasn’t terrifically over-excited about it anyway, though lots of my friends were having fun with it. I really only picked it up because I said (months ago) that I would, and because, well, I had nothing else I really wanted to play on the computer anymore, and my time with Skyrim is closely rationed (the spousal unit gets a turn now and then too).

I will say, I thought the opening cinematics were boss. I’ve only seen the generic one and the Republic side, but at some point I’ll make Empirescum characters and get to see theirs. 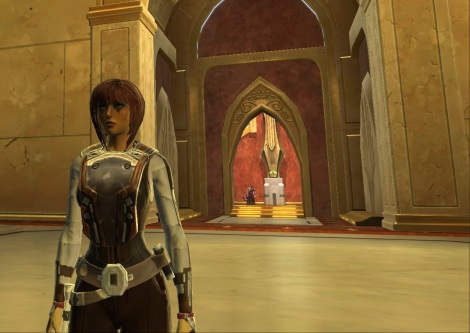 My smuggler is not impressed by the Senate

After that, creating a char and logging in and actually playing was… weird, in some ways. It looks and sounds a lot like SWG – how could it not, when they both used the same LucasArts material? Star Wars music is Star Wars music, after all (and it’s one of the reasons this is about the only game that has music I like – it’s REAL music, not some endlessly looping 20-second pseudo-medieval piece of crap with lots of Highlander-meets-Braveheart horns). I actually want to have the music on all the time, but the combat music is tied to it and I really, really hate combat music – so it’s off for now, but not willingly.

It plays and feels a lot like WoW or any other MMO you’ve played in the last 5 years. That’s intentional, and it’s actually pretty smart. I haven’t had to worry about learning new keybinds (much), and when I automatically reach for a key to open a UI element, it’s usually right. My main gripe with the UI is that at 1920 x 1200, which lots of people are capable of these days, it’s still gigantic and clunky, and it’s entirely unscaleable. Even WoW lets you do that without mods – c’mon, Bioware.

Friends have commented on how odd the lack of attention to the UI is, but I’m not surprised at all. Bioware make GAMES, not UIs – I remember the crappy one in DragonAge and in games before that, and I can just see the justifications from here. And, to be honest, I’d rather have a corking good game than a great UI, though I’d really rather have both. The UI feels a lot like early WoW, and hopefully that will change. It’s livable-with, anyway – more an irritant than a full-blown deal-breaker, and you know what a nerd I am about UIs.

I have, of course, made eleventy-million characters already. What can I say. Ironically, the one I’ve preferred playing so far is a tank, believe it or not, though I haven’t been all that good at tanking *all* the mobs with her in the one instance I did (but then we didn’t have any heals either). Even so, all the classes are fun and every class has its own personal story, which has of course been one of the SWTOR selling points.

I’ll admit, it’s pretty neat, but it’s also a little weird. For a while it felt as though I were playing a single-player game that happened to have other people in it – it still feels like that to some extent, but I’m getting used to it, and that feeling ebbs a little once you get off the newbie planet. It’s been really interesting to see that different classes are here / doing X / looking for Y / going to Z for different reasons – I don’t really want to say much because it’s spoilerish, but while the Smuggler and the Trooper base classes both start on Ord Mantell, for instance, their stories and reasons for being there are quite different, and will unfold differently. It’s… neat.

I’d be playing now except it’s Tuesday maintenance. You’d think we were playing WoW or something… 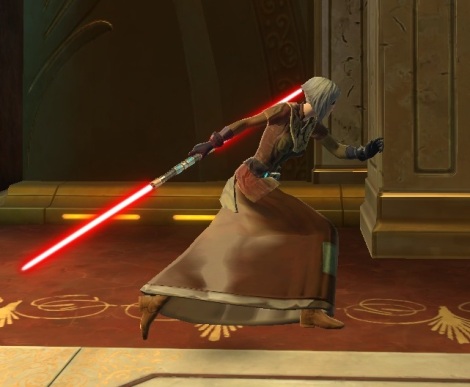