People keep asking me this and I haven’t managed to put together a satisfactory, canned, 10-words-or-less answer yet. I couldn’t manage 10 words or less if someone was sitting on my tongue, anyway.

However, I did comment over at Scary’s place (go there, it’s very scary), and I’m going to be cheap and paste my comment here because, flippant as the comment is, it does encapsulate some of what makes TSW different.

People keep asking me “But HOW is it different?” and I either can’t answer or have to spout a wall of text. Lately I’ve been keeping it to tidbits:

– I get to blow zombies up with shotguns / magic / napalm / IEDs
– I get to slice zombies into little pieces with sweet-looking katanas & fist weapons
– I get to melt faces with fire magic
– All of this while wearing a corset and a cute baby-blue bra. Or leather pants and a trenchcoat. Or a T-shirt with a kitten on it.
– The music is the ONLY game music I’ve ever liked enough to keep it turned on
– NPCs say the F-bomb. This pleases me in a game, since I use it too. Plus I like pseudo-hippies who sound like Dennis Hopper in Apocalypse Now (or Blue Velvet for that matter). F*** yeah!

Before someone reports me to the potty-mouth police, I’m not advocating swearing like a sailor. It’s not really the F-bombs. It’s the fact that, so far, the adults in the game talk like… well, adults, and not like… well, MMO NPCs. You know – “Prithee, brave adventurer, I have heard of thee! I needest help riddething mythelf of the awful rats that have infested my petticoats. Help me and I shall give thee a rotten apple core and my dead father’s old boots!”

Hyperbole, moi? But you get the idea.

I’ve added a TSW Screenshots page where, assuming I have correctly figured out how galleries work, I shall be adding a hodge-podge of screenshots. Assuming I can remember to take them in-game. 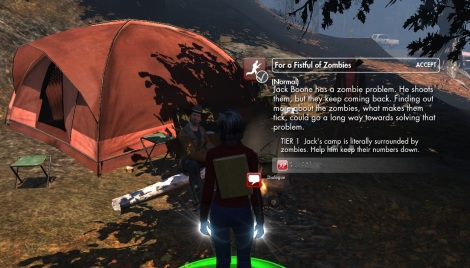 You can blow their heads clean off.

Other things that make TSW different, for me:

– It’s dark. Not lighting-dark – I’ve been asked that by a few folks who have seen screenshots that all seem very low-light / dark-toned. The sunlight is very sunlight-y, and there’s a normal day/night cycle. Maybe hype-screenshots are more impressive when they’re dark things. But no, the game isn’t dark in a lighting sense (unless, you know, it’s night – and even that’s not too bad – or you’re in a cave or a basement… but I digress). It is dark in a mood sense, while also being a little humourous, at least in the first zone. Things become a lot darker and a lot less humourous in the second zone, and that’s all I’ve seen so far.

ANYway, point is: it’s dark in a moody way. Bad shit is happening in these places and, while the Zombie apocalypse is blackly funny, it’s also very creepy. So far TSW has been pretty good at the creepy vibe.

– The game is beyond chock-full of references. Off the top of my head, John Carpenter, Stephen King, Edgar Allan Poe, H.P. Lovecraft, David Lynch, Coppola, various Clint Eastwoods – and they’re just the obvious ones. I’m pretty sure there’s even a Eureka reference.

– EDIT: NPCs have very interesting things to say if you’re after lore & clues & info. Click on the chat-bubble and select a topic – note, however, that each topic usually has at least 3 entries, sometimes more – so always click a topic again! It will get a tick on the line when you’re done with that topic (though sadly the tick isn’t persistent – you may have to write down who you’ve talked to).

– Making notes is a great asset in this game. I like this. I had notebooks full of notes for Asheron’s Call, and I miss having to pay attention like that. Yes, you can play the game like a WoW-jock, but if you dig you’ll find all sorts of interesting corpses. Er, info.

– This one-server many-dimensions thing the Nazgul kindly linked for us last week (here it is again) is a nice twist. No need for alts on other servers – just hook up with your buddies, regardless of what “dimension” they’re in,  and you can play together. The hardest part is fitting this in with the jargon & concepts we already have. A dimension is not a server and it’s not really an instance – and if we call it that, people are going to get awfully confused. I’m going to think of them as Bubbles, because I’m odd that way.

– I can advance at my own pace. Yeah yeah, I know many games purport to have that. But take the first zone, Kingsmouth, for instance. There are probably 30-40 different missions you can do there (I pulled that number out of my backside, so don’t go hating on anyone if it seems low). They’re scattered all around the zone and if you don’t explore you won’t find some of them. Point is, almost all of them are repeatable after a few hours – it comes out at more or less once a day for most of them. If you’re a content-devouring, get my shit and move on to the next place kind of player you can do that – but if you’re someone like me who has trouble leaving their comfort zone, or who likes trying out new weapons and whatnot, then you can keep redoing stuff (at diminishing returns) until you’re comfortable enough to move on. I like that.

Enough for now. I have a day off (I hope) and I intend to spend it playing, not blog-posting. Even if I should be installing an air conditioner for my office and a CPU cooler for my computer. Meh – tomorrow.

10 responses to “The Secret World – But HOW is it different?”