My first tame attempt — actually my second: the first couldn’t happen because the server default setting of Max Tamed Dinos is 0, for whatever reason. If you run your own server, note that this is a server-wide number and not a character-based one. I set it to 3000 and tried again. I think I’m level 5 or so there.

Here’s the Dodo’s info page from within the game (also available on the wiki). Dodos really are dumb as rocks, but I found mine to be surprisingly cheerful and much more companionable than the bestiary author thinks.

When the dodo gets too far away from its owner it will burst into the silliest flappy/hoppy run ever.

And it doesn’t swim but rather bounces in/through/over the water behind you. Truly the most gormless creature ever, but oddly endearing.

Random picture of one of the many spires on the island. At first I thought they went all the way to the ground but nooo, that would be too easy. They float. Well, the ones I’ve managed to see the base of do. I also wanted to show off my Lara Croft pose there.

I’d promised myself I’d try to tame one of the wee buggers (aka dilophosaurus). So I managed to knock one out and filled its gizzard with narcoberries, only to realise I’d forgotten to stock up on meat. I put the two I had on me in the dino’s inventory and it absorbed them instantly.

Hrm. Okay, time to attack something — or rather, the only thing around.

Attacking a triceratops — basically a tank with horns — with a spear did not turn out to be one of my brightest schemes. But at least I made it back to my corpse since the only local carnivore was snoring away on the ARK’s equivalent of sleeping pills. It’s oddly small but at least it’s stylish. And I got my stuff back.

I gave up on the idea of taming a dilo till I run across a sizeable spawn of dodos to murder for meat. Instead I alternated between chasing supply drops (all the ones close to me where level 15+, which I am not)…

…and expanding the house; this latter turned out to be necessary once I saw how much space things like a bed (from a supply drop) and a bunch of storage boxes (which I made) actually take up. 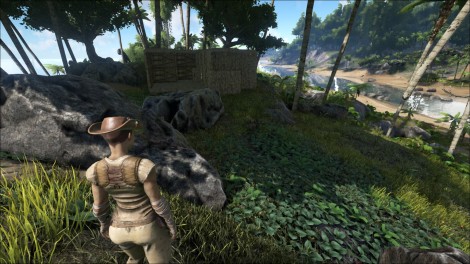 Which means I basically spent most of the session harvesting, and since that’s an activity I enjoy in almost every game I play, I had fun. And found cool stuff, like a spinosaurus corpse in the water not far from the house. I’d watched said Spino run rampant along the water’s edge down there for a while, and I’m not actually sure what killed it — though given what attacked me when I tried to loot and then skin it (giant freaking piranhas and no, I did not get screenshots, I was too busy swimming and screaming), I’m guessing it was probably the fish. 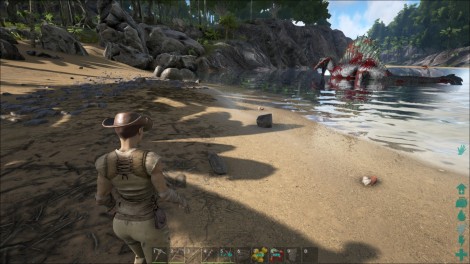 As I gave up on looting the corpse and turned to go back home, I found the coolest thing so far in my game and totally forgot to take a screenshot, because that is totally how I roll. Fear my mad photojournalism skillz. So here’s a screenshot of it in my inventory, which isn’t nearly as exciting (and sadly dropping it just looks like a brown paper parcel, either for now or forever). Equally sadly, the tantalizing “Or….” from the description hasn’t been implemented yet – if it ever will be – and so it won’t hatch. But it’ll make one hell of an omelette since it’s about the size of Ysharros 1.0’s ass.

After the really cool event came the really bad event. I was out supply drop-hunting and forgot that Happy Too (the Dodo, remember) was on follow. When I got attacked by a dilo I turned and ran (mostly to let the poison work its way out of my system), half-blinded, and only vaguely saw the little green nameplate bob past me in the other direction. By the time my vision had cleared and I got back to the dilo, Happy was pining for the fjords. I avenged him — with a great deal of prejudice given that the dilo was twice my level — but it didn’t bring Happy back. 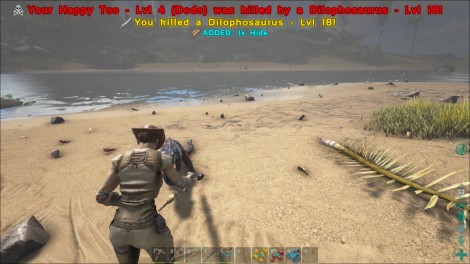 I mourned him… then I skinned him and cut him into fillets. Turns out dodo tastes like chicken.

After that I worked a bit more on expanding the house, though now that I have wooden foundations and walls I should most likely work on getting some of those made instead. Which was what I was working on (harvesting a butt-ton of wood) when I saw spino’s brother, dad, or boyfriend hunting where the previous one had died not long ago. When I say “saw”, what I really mean is “ran up to, failed miserably to hit with my dinky slingshot and got killed by”.

This time I didn’t even bother looking for my already-devoured corpse, because I got smart and had made myself a spare set of clothes and tools for just this eventuality. However, having managed to open the previous spino’s corpse (if not loot it) and seen a bunch of berries and other stuff inside it, I’m wondering if killing my attacker would return some of my devoured stuff. Of course, one then has to figure out how much one wants to wear one’s stuff when it’s covered in dino digestive slime.

Anyway, I spied on the spino a little to see whether our resident brontosaurus or the recently-arrived trikes would attack it, or at least kill it when it attacked them, but none of the above happened. So I logged out, pondering (and rejecting) God-mode modifications.

Ysharros 3.0 is level 10. Not bad for a few hours’ play; now if only I could talk the SO into logging in and playing with me… it’s not a bad game solo, but it’s clearly meant to be played with (and/or against) other people.